I consider myself socially conscious around visual novel games, especially after experiencing the entirety of the Danganronpa trilogy, a trilogy that launched me into the fandom and has me hungering for an inevitable fourth entry. However, one series that I never gave enough respect has to be Ace Attorney. I once defined myself as somewhat of a stranger of the series and had only beaten one of the games, which was Dual Destinies, an entry deemed less narratively and emotionally impactful in the series by avid fans. Upon the launch of the Phoenix Wright: Ace Attorney Trilogy on PlayStation 4, the first time the original trilogy ever graced a PlayStation console, I pounced on the game with intrigue and curiosity. Having completed every game, I can safely attest that this is truly a landmark franchise for Capcom.

Starting with the first one, you begin the trilogy with a young, inexperienced Phoenix Wright venturing into his first trial as a defense attorney. He stutters and sputters through his introduction while his superior, Mia Fey, guides him through the ropes of being an attorney. Fundamentally speaking, the core gameplay mechanics have the same formula. You are given a specific scenario and you have to find the answer to it. Whether it be a contradiction, a revelation, or a conclusion, it all focuses on answering a question with the information you have been provided throughout each case.

The first case in the first game is, predictably so, a very rudimentary one. A cutscene plays showcasing the perpetrator and his motivations and builds off from there. The scenario is simplistic, but captivating enough for the player to uncover the truth and defend your ally. In this case, it’s Larry Butz, a young man destined for misfortune who consistently clumsily fumbles his way to another disaster throughout the trilogy. Most of the time, he is designated as a convenient witness in an otherwise hopeless murder mystery. Mia Fey is Phoenix’s mentor in the first case and acts as an Obi-Wan Kenobi-type character after her death in the second case for the duration of the entire trilogy. Don’t worry, it’s not that big of a spoiler. 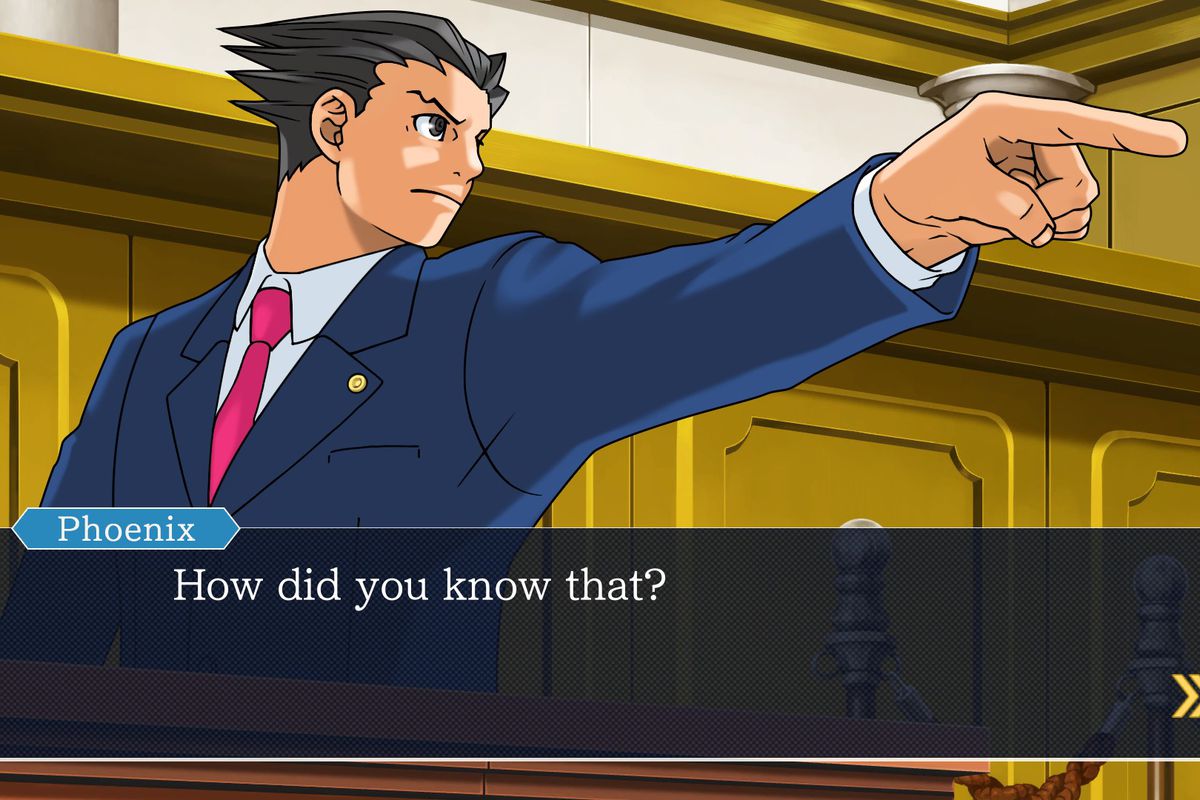 The dynamic character development warrants commendation. Phoenix’s consistent reliance on Mia and near-familial relationship with Maya, Mia’s little sister, strengthens his character into one of the most memorable and likable main protagonists in gaming. His incessant sarcastic remarks and cynical internal monologues steals out a chuckle from my mouth almost every time. When the story takes a turn for the worse, the characters react accordingly and the dramatization often works very well. I never found the dialogue to be overly-repetitive, however I would have preferred increased brevity in some moments of the games. Perhaps a running gag lasts too long or the goofy sense of humor drags the narrative more than it needs to. I wouldn’t evaluate that negatively as the writing is overall stellar.

Each case comes with its own stakes. Perhaps a beloved character is wrongfully accused or Phoenix’s career is jeopardized or the prosecution is an especially formidable foe. Oftentimes, I don’t quite recall the case in the middle of the games as clearly as the new cast of characters don’t leave a strong impression on me. Recipe for Turnabout had a slow first half but the conclusions of the various mysteries were rather satisfying. I do admit Recipe for Turnabout had a bit too many throwaway characters for my liking. The borderline homophobic chef character also did not do the case any favors.

My personal highlights for the series must be the final cases for all of them. Technically, the first game had two finales from Capcom since it had a dual release. Both of which are exceptionally strong in emotional and intellectual storytelling. The fifth case is more long-winded as it acts as a technical demonstration of the Nintendo DS’s capabilities. Nothing feels out of context despite the intentions behind it. As a result, I prefer the fifth case more than the fourth as it’s more creative in implementing more gameplay mechanics and thus feels like the most enjoyable case not only in the game but in the whole trilogy. 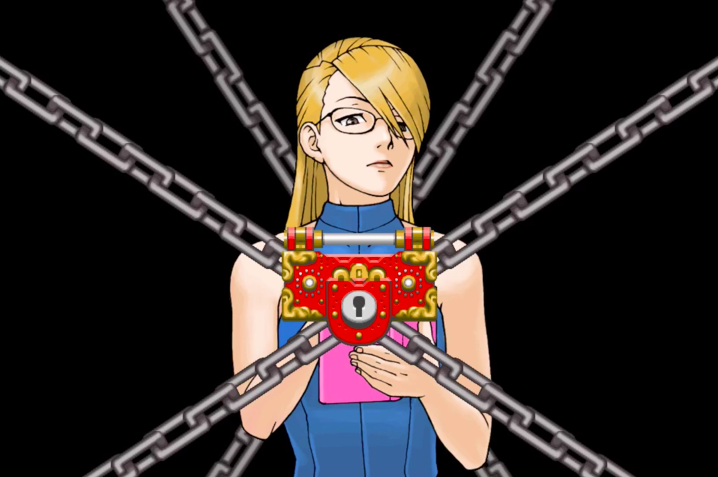 Speaking of gameplay, the bulk of the gameplay mechanics is focused on providing evidence to back up your claims in court or in heated debates. Your greatest weapon is the evidence and you are tasked to use it during three moments. During witness testimonies in court, you can either press the witness or present evidence contradicting a particular statement. During Magatama interrogations, which are introduced in the second game, you can force a character to reveal a secret or five concerning the case at hand. During challenges from the prosecution or the judge, you are forced to give compelling evidence to an argument Phoenix made. Of course, there are sometimes twists to any of those circumstances.

Sometimes you just have to press a certain statement to get an additional statement which Phoenix can object. Or you can just press through an entire testimony and get crucial information. The game never tells you explicitly how to tackle each testimony as it expects you to handle all of them delicately. In my playthrough, pressing almost always roots out the suspicious statement needing an objection. In rare instances, the judge penalizes you for reckless questioning, forcing you to find the right statement without that handicap. The difficulty of the testimonies varies. It ultimately depends on how much you pay attention to the plot and the importance of certain evidence.

Compared to other elements of the trilogy, one that has stayed consistent is presentation, which is to be expected as Capcom subscribed to one engine. Most of the animations are limited considering the hardware the trilogy ran on. Limitations aside, the quality of the character design stands out, especially with the facelift. Many fans lament the lack of pixelated artwork in the remake. However, I personally prefer the upgrade. Certain characters simply look cleaner and more distinct without the fuzzy appearance of their Nintendo DS models. Musically, there is no doubt in my mind it delivers some of the best tracks in gaming. In every single entry of the trilogy, there’s a particular track or three that gets trapped inside my head and refuses to get out. Sure, it helps that so many tracks are revisited literally dozens of times. However, I never found myself tuning out the music. I’m not nearly as fond of some track as the others, like the first game’s testimony theme versus the third game. The second game’s testimony track is perhaps my least favorite of the trilogy, however the allegro version redeems all of them. Also, the investigation themes for the third game is damn near perfection. Of course, I cannot deny that the corner themes for all games feel so satisfying to hear after an intense battle in court.

Oh yeah, I should mention that I adore the antagonistic nature between Phoenix and the prosecution, particularly because all three (or four if you count Payne) prosecutors have their own methods. Edgeworth is the most traditional of the prosecution, relying solely on objectivity and keeping Phoenix in line. He’s not necessarily a villain, just a man doing his job and doing it exceptionally well. Franziska von Karma on the other hand hates your guts from the very beginning. Her animosity towards Phoenix and egregious whipping behavior would have you believe that she’d be an obnoxious plot device. On the contrary, she’s perhaps one of the most entertaining characters in the series with her nearly insane vitriol. Then there’s Godot who perhaps can be more concisely defined as a villain in the series. However, that is not to say none of the prosecution evolves and becomes more in-depth and three-dimensional.

Everything about this trilogy screams ineffable quality. The minor qualms that wrestle in my mind is the lack of a proper continue system. Starting from when you last saved, which can be quite far back if you forgot, because you failed to answer correctly is a bit tough. Danganronpa gets it right as it has a continue system whenever you get a game over. The only penalty you receive is losing an opportunity to get a specific trophy. I also dislike the beeping voice effects, but that is only a pet peeve at greatest. Other than that, with its undeniably fantastic storyline, memorable characters, and mostly commendable music (some tracks are noticeably weaker than others). If you want a game with a good story that intellectually challenges you, this is an easy get. As far as visual novels go, this is by far the creme of the crop. With that in mind, I’m giving the Ace Attorney Trilogy a 9/10.