Paper Mario: The Origami King – My Hopes and Fears

Nintendo arbitrarily dropping a reveal trailer for a Paper Mario game, a franchise that spawned a couple of my favorite games and my favorite RPG period, surprised me in the morning, to say the least. I have previously read rumors and reports that Nintendo was working on this title behind the scenes, but enthusiasts across a plurality of forums mused on the franchise returning since the most recent and arguably most controversial entry released on the Wii U. So, like most, I tempered my expectations by dismissing these reports as a manifestation of wishful thinking from whatever inside source was sharing this information. Fortunately, my pessimistic expectations were abruptly decimated the moment I saw Nintendo embellish social media platforms with an upcoming entry for Paper Mario, subtitled The Origami King.

Given the limited knowledge that we have, I cannot accurately portray the game as a whole based on a two-and-a-half-minute trailer. That being said, consider my qualms as questions that arise from underlying concerns rooted in my deep respect for the franchise and creative efforts of the first three games. A chief concern that I have is the risk of an identity crisis causing a conflict between the narrative and creative potential the game establishes. In Mario, character design is vital to evoke a distinct emotion and aura that represents a certain world in which they inhabit. I’ll use Thousand-Year Door as the main reference throughout because I think the game flawlessly nails the identity of its world. In Rogueport, players see a diversity of races from the Mario universe, each of them wearing specific attire or possessing a specific skin color to embody their background and heritage.

The trailer looked simultaneously familiar and different. Fans welcome the reintroduction of an original adversary that puts the entire Mushroom Kingdom in jeopardy. However, fans question whether it will recover the charm the first two games established. Unfortunately, it appears Nintendo remains conservative with new character designs with The Origami King compared to the 64 and GameCube counterparts. Conversely, the world design and set pieces appear more ambitious than the franchise has ever seen. The environments possess greater detail and boast larger scenes, doing away with the hexagonal structure the 64 and GameCube classics have relied on. Additionally, the prospect of a supposed “race” war between the paper characters and origami characters has been something many fans have clamored for. As for the battle system, we sadly know little of that and only rely on mere seconds of footage.

Ultimately, Paper Mario: The Origami King will likely not rekindle the magic of The Thousand-Year Door due to the frequent creative liberties taken by Intelligent Systems. Fans of the franchise must admit that The Thousand-Year Door will effectively be the pinnacle, but I implore them not to ignore The Origami King simply because it doesn’t perfectly match the 2004 masterpiece. The Origami King could very well be one of the best Paper Mario games, easily surpassing Sticker Star and Color Splash. Hell, it might even rival that of the N64 original if it plays its cards right (not literally, but you know what I mean). Hindrances and shortcomings could emerge in The Origami King, whereas merits and strengths could surpass those flaws. 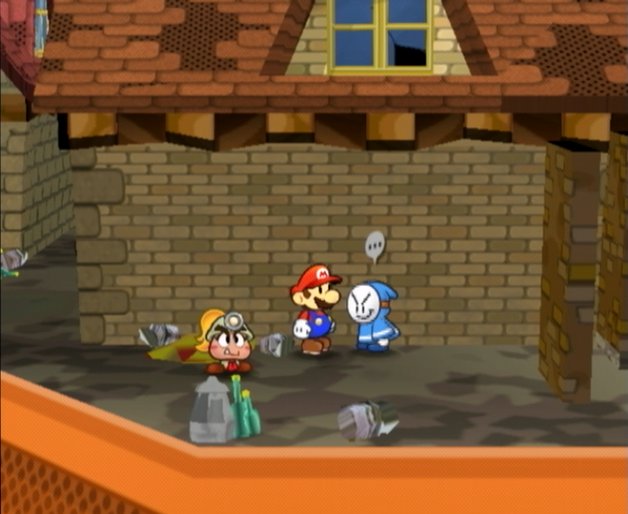 This cast of characters has a variety of agendas that further individualize the NPCs, some of which even shape the story. To me, Rogueport is a great example for how a video game should develop a world. I don’t see anything that remotely resembles that in The Origami King, based on what I saw. Some screenshots from Nintendo’s page provide additional clarification and elaboration of the world. However, I fail to see something tangibly new from the characters themselves. They’re essentially the base Mario World designs wearing some clothes. While The Thousand-Year Door used the Mario World characters, they had distinct expressions, shapes, colors, and overall appearances that gave them their own personalities.

Another shortcoming that could occur is an inferior battle system that plagued the two most recent Paper Mario games. While I concede that we should see a more extensive look at gameplay footage before making any judgments, I fear that the emphasis on the ring mechanic could result in a repetitively simple battle structure. Given that the battle system simultaneously requires the player to properly align the enemies and choose the most effective move or item against them, Intelligent Systems would need to design the battles in such a way where both the rings and actual battles work well with each other. If Intelligent Systems minimizes the battling mechanics in favor of the ring system, the battles would become tediously easy; just rotate the rings until you get the right alignment, then attack and gain XP. If they add nuance and complexity to both mechanics, then the challenge could overwhelm the players and encourage them to find ways to cheese through the battles. 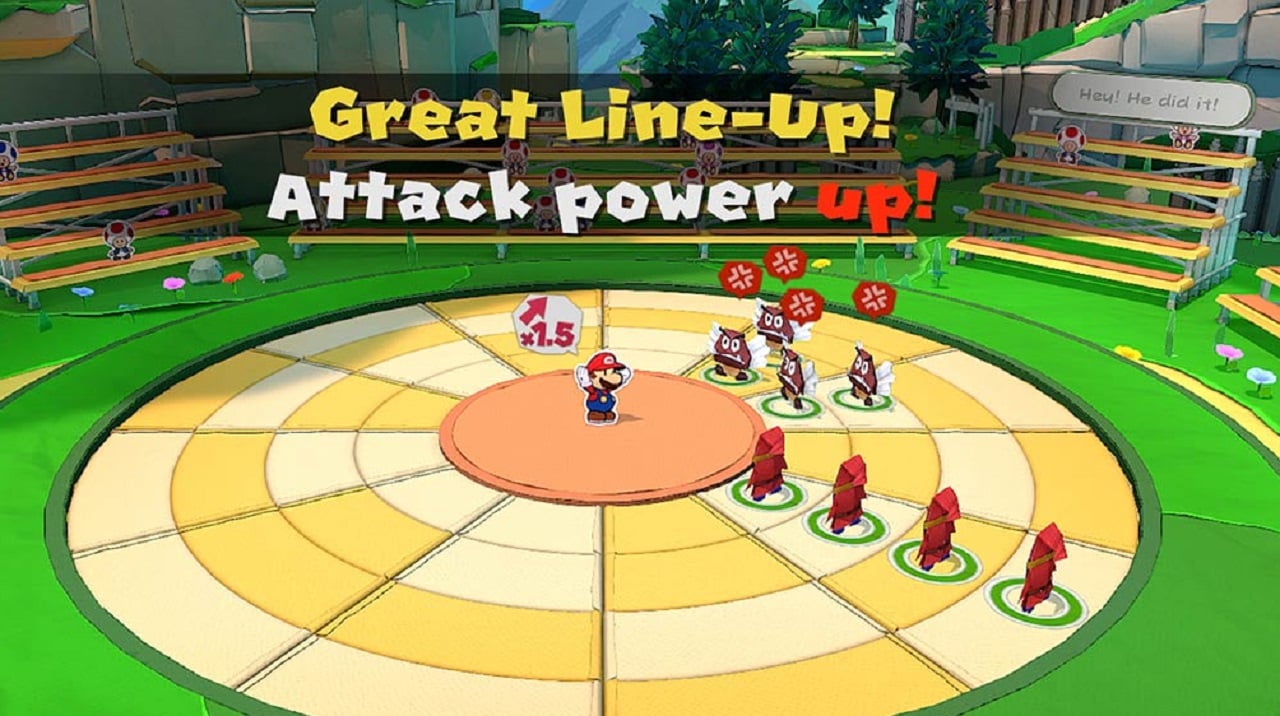 I’m in full support of creative risks in video games, as it nurtures innovation in the medium I adore most. However, for a franchise that struggled to rekindle the critical success the first half of the franchise enjoyed because of failed creative risks, I remain skeptical whether trying new ground is where the series needs to go. Of course, Intelligent Systems could establish a brilliantly designed battle system that is easy to learn yet hard to master, which made the first two games such excellent RPGs. Skepticism aside, there are positive elements of this trailer that need to be amplified, chief among them is the premise. The idea that an alien origami race invades the Mushroom Kingdom and forcefully folds iconic Mario characters into zombified origami caricatures sounds pretty awesome. It may not have the grandiosity of The Thousand-Year Door, but The Thousand-Year Door is an exceptionally made game that is intrinsically difficult for subsequent entries to perfectly replicate.

This premise indicates the narrative will have more ambition, something the franchise hasn’t seen since Super Paper Mario, and fans should celebrate that. While Nintendo is currently marketing comedy in this game, the way in which they revealed it suggests they also want to showcase its darker nature. A folded-up Princess Peach with an indistinguishable visage and distorted voice greeting the audience doesn’t evoke the happy-go-lucky attitude Color Splash perpetually espoused. Both The Thousand-Year Door and Super Paper Mario excelled at balancing levity and gravity, and it appears The Origami King aspires to recapture that specific narrative dynamic, which makes me, as a fan, greatly enthusiastic. What are bosses going to be like? How big will these levels become? Is King Olly, the main antagonist, going to transform into some kind of origami monstrosity, akin to the Shadow Queen? There is so much potential based on a thin slice of footage we’ve seen of the game in action, and we only have less than two months until the game releases.

Despite my abundant skepticism for The Origami King, I still generally feel more optimistic than I do skeptical largely thanks to the promising narrative. That being said, my questions and uncertainties still stand, and I hope the answers Nintendo provides are satisfactory and strengthen my hopes for the game even further. A Paper Mario that prioritizes the adventure over comedic lines is my ideal Paper Mario game, and it appears that The Origami King will deliver on both. Fans should be excited, but I understand their skepticisms as well. Paper Mario holds a special place in my gaming heart, and I’d hate to see it get yet another average entry. However, given that Intelligent Systems has made an effort to prove that this Paper Mario will be significantly larger than the last two, fans should feel satisfied at the fact that they’re getting an epic Paper Mario adventure again, something that hasn’t been seen since 2007. All I can say to that is welcome back Paper Mario.

What do you think about what you saw of The Origami King? Are you just as optimistic as I am, or would you refrain from judgment until the game is playing on your Switch? Let’s talk about it in the comments below, and stay tuned for more Sick Critic feature pieces like this one!