It’s fitting that a game I previously picked to shake up the Card Brawler genre is all about survival of the fittest. Even back then during the beta I could see the potential this one has for folks who want to devour a competitive experinece on a cross platform environment. Evolution: The Video Game (Free) has leaped into the fray with a powerhouse game poised to steal the thunder of some of the most popular games on the app store.

Evolution is a four player card game that puts you in control of the fate of burgeoning species of prehistoric creatures who mainly just want to eat whatever they can to survive. You play the game by spawning dinos that get hungry and try to eat. The best eaters win. Of course, what food is available, and what things are considered food depends fully on how you evolve your dino. Once they hit the table you can evolve them over and over, but they only hold up to 3 at a time. The Evolutions you can choose range from traits like long necks to access unreachable plant food, to defensive traits that act almost like armor to the obvious game changer, carnivorous. Turning your dino into a carnivorous beast means that you no longer can eat plant food, but must go after larger prey, which means other dinos. Depending on how defensive your opponents are, you may end up even eating one of your own. The core of the game is reading an opponent’s use of traits and responding in a way to gain an advantage over them with your own traits.

Evolution is a game with a lot less randomness than your typical card brawler. The decisions you will end up making are going to be determined more often than not as a reaction to your opponents actions rather than as a reaction to a low probability of drawing a playable card. This might be the best feature of the game right here. Because you have access to so much of the deck in a given round, your trait choices are usually not just one dimensional. Do you add extra body weight to repel your opponent’s carnivorous species or do you learn how to climb trees? Depending on the situation one may be an infinitely better choice than the other.

Back when I saw Evolution at Pax in November, I knew I would love it. The app has come a long way since I first played the beta back then. Gone are 99{c4f60b86d58bd0bb42d7d202d81274380459a85a5d81d139dd8bd0c48cc6a02e} of game freezes, disconnects, and random bugs. It’s obvious the digital team at North Star have had some long nights cleaning up the code and fine tuning things. One issue that many board game adaptations have is pacing, but the phases of the game seem to go pretty fast and there is a cool feature on the app that allows you to play out your hand simultaneously that keeps the game moving while folks might be busy strategizing. Really the only issue I have is that outside of the tutorials I wish there was a little more you can see outside of the game. For instance a text based quick reference that talk through each trait card and maybe how certain game mechanics interact would be awesome. Seeing your ranked progress would also be really cool because as of now I think you only see it at the end of game screen if you rank up. 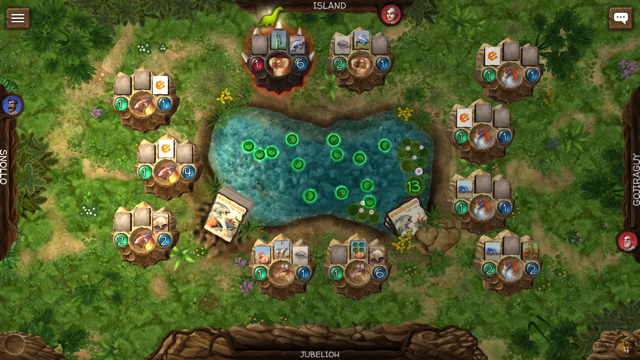 The number of traits in game is limited, but getting the ones you want can be frustrating. Defensive abilities and abilities that allow you to eat before other dinos in particular are very tough to count on. There have been times I have played multiple games without seeing the traits I spy other players getting multiples of. I’m not sure how card scarcity works but seeing a winning strategy play out when the cards used were never available to you can be frustrating, but the best way to combat it is to find the counters to the cards that get played.

Evolution is a game begging to steal the spotlight from heavy hitting card games like Elder Scrolls: Legends (Free) and Hearthstone (Free). While the offline version is free, playing more than one online game a day will cost you $8. It’s a cost that is in my opinion fully justified and absolutely worth spending. For gamers who complain about free to play aspects of games like this, Evolution is a no-brainer. The “real gamer” crowd should be eating this one up and shouting it from the rooftops. I mean, really anyone should. For the cost of a few hearthstone packs you get a full game and every card is immediately available. Even if you take cost out of the picture, this one compares solidly on a strategic level too. Where you might end up with a card in other brawlers that are basically unusable, there is always SOMETHING you can do with every card in Evolution. You’ll never get to a round of play and have to hit the pass button waiting for something more useful to show up. 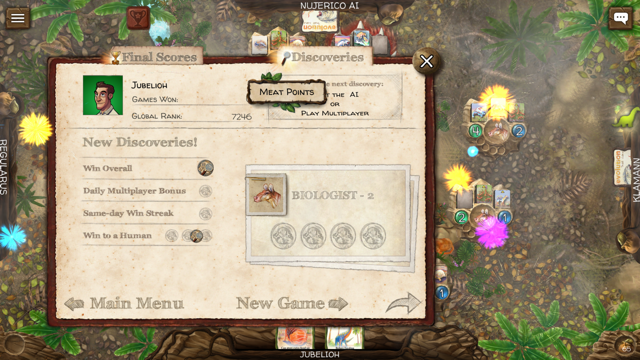 Even though frustration can be a factor at times, Evolution is a game with a lot less randomness than your typical card brawler. Another great part of the game is that if you take an aggressive strategy, you can’t just wipe the entire board of enemy minions like in some games, but each situation might require a different solution. There are less all-or-nothing plays.

So where do we sit with Evolution? Its a little weird comparing the usual 2 player head to head gameplay with Evolution‘s 4 player configuration, but even so I think there is in many ways more game here that is immediately accessible and has a longer term viability than most other card brawlers. With promises of further development we could see new formats, new single player adventures, competitive seasons and more added on in the future. I hope the price tag doesn’t scare players off because this one is worth every penny.