Cadence Of Hyrule mixes Crypt Of The Necrodancer and Zelda into a unique rhythm-based roguelike. Is it a match made in heaven or should you stick to traditional Zelda? Check out our review and find out what we thought of the game.

When you first boot up the game, you will be playing as Cadence, a young woman who is trapped in Hyrule and is not sure why she is here. After a brief tutorial, you get to choose between Link or Zelda to play. Link is more straightforward in my opinion because he can hold his shield up longer and deflect enemies attacks easier. Zelda has magic, though, and she can manually control where her fireball goes, making her more powerful but also more challenging to play. After you choose, you are thrust into this games version of Hyrule and tasked with clearing four dungeons to gain access to Hyrule Castle. Easier said than done.

For those of you unfamiliar with the roguelike game type, you can expect to die, a lot. I would say on average the first hour, or two will be spent trying to learn the games rhythm-based combat and memorizing enemy patterns. You also lose certain items and Rupees when you die. If this sounds overwhelming already, don’t worry, it is just a lot of one-two one-two on the Dpad. You can turn off the rhythm part of the combat as well, but I didn’t get nearly as much enjoyment out of that. When I beat the game, I had 36 deaths total and a little over nine hours of play time. 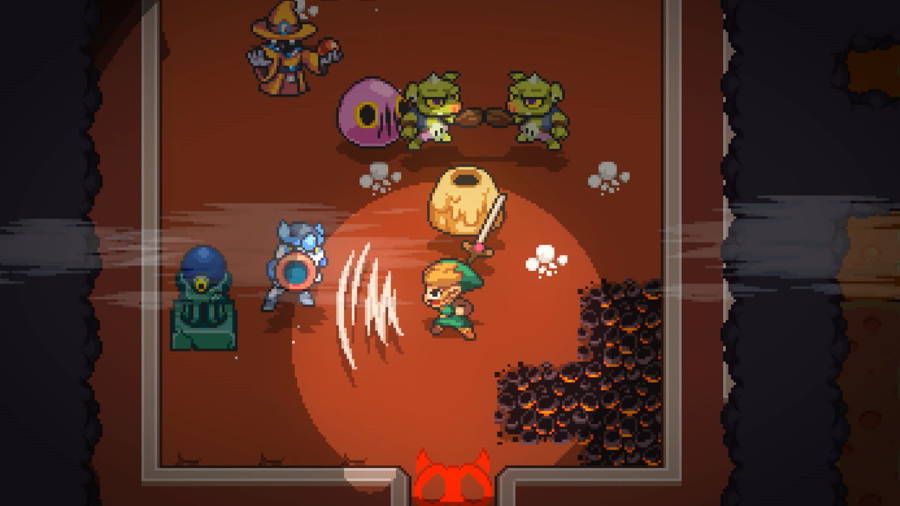 So let’s get into how the actual game works. Moving to the beat, you will go one square at a time until you run into an enemy. If you move towards the enemy during the beat, you will attack them with your equipped weapon. For basic enemies just running straight at them works but eventually, they will have shields and armor so you’ll need to move around them a bit more. As far as enemies are concerned, you get a lot of Zelda classics. The knights from A Link to the past, Chu Chus, Poes, Deku Scrubs, Bokoblins, and Lynels, to name a few.

While your main task is to clear the dungeons, the land of Hyrule is full of other places to explore. Kakariko village Village and Gerudo Valley have Bombchu bowling and Archery Contests. The Lost Woods lures in wayward travelers in and tosses them right back out unless they know the right path. Cracked walls are waiting for you to throw a bomb at them, revealing their secrets and hidden merchants. Fortune tellers are waiting to take your hard-earned Rupees to help point you in the right direction. And of course, the great fairies are waiting to be found so our weary heroes can heal up and relax.

While we are talking about Rupees, let’s go over the two currencies in the game. Zelda’s traditional Rupees are earned by beating enemies, looting chests and can just be found in bushes. You can spend these on various items, potions, and some equipment upgrades. When you die, you lose all Rupees, so there is no sense in hoarding them. Diamonds are the second currency, and these matter a bit more important early one. Diamonds are used to buy things at the Death store, upgrade weapons, and occasionally trade with certain merchants for special gear. You do not lose these when you die, and they are earned by clearing a whole room of enemies. Harder to get but also more valuable early game. 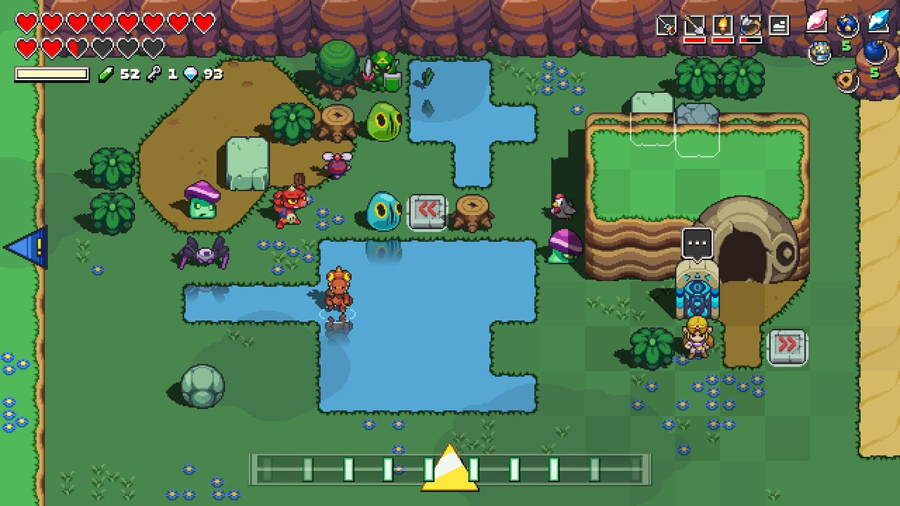 Cadence Of Hyrule allows you to use multiple different weapons on each character, but no one can use all weapon types. For instance, Zelda and Cadence can use a dagger, but Link cannot. You start with one weapon on your character and have to find the rest. You can then use your diamonds to upgrade most weapons with special effects like poison or extra damage. The weapons also have different attack types, so a spear has more reach, but a broadsword hits multiple enemies at once. I was very impressed by the amount of weapon options you are given on most characters. That said there is no hammer, and that is a crying shame.

My chief complaints about the game come from how easy it eventually gets. There was a point where I just felt in tune with the game and didn’t die for probably five hours, and steamrolled the dungeons. I thought the dungeons were put together well, but the lack of challenge left me a bit disappointed. Another thing is you eventually run out of things to buy with both Rupees and Diamonds. After I beat it, I wanted to go back and play more, but outside of starting a new game, I didn’t see any reason to. That doesn’t take away from the fun I had playing it; I just wanted more.

So the big question left is, how is the music? The answer is fantastic. When I started with Link, I went over a beach square, and the music hit me like a brick. The overworld theme has Tal Tal Heights, Hyrule Field, and The Great Sea all on one track. That might sound like a mess, but as soon as I heard it, all I wanted to do was explore. This whole game is just one awesome remixed song into another. Its a massive play on nostalgia, yes, but it works wonders — special shoutout to the Windmill Hut Song Of Storms remix.

If you are a Zelda fan, then this should be a no brainer. Anyone who likes great music, fun gameplay, and action RPGs should also pick this up.

The post Cadence Of Hyrule Review appeared first on GamersHeroes.