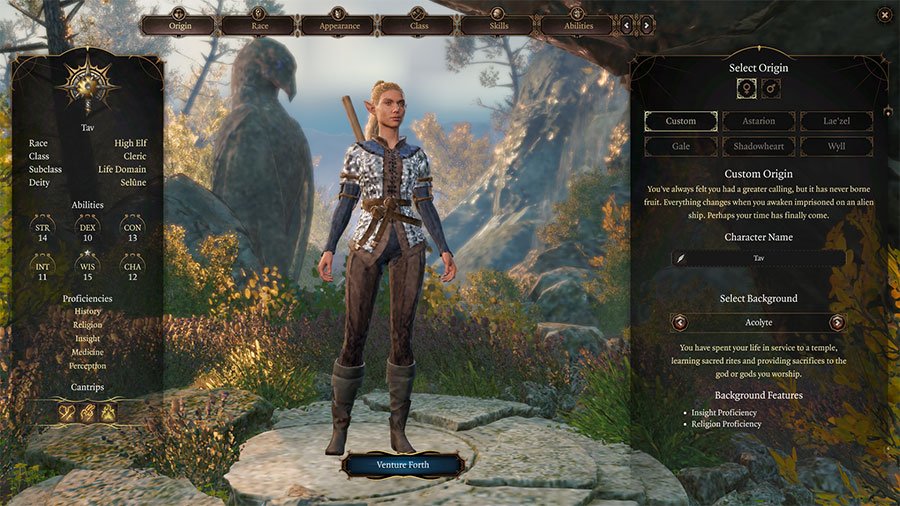 Scared of messing up or wondering what’s the best class to build in Baldur’s Gate III? This Baldur’s Gate 3 Character Creation Guide takes a deep dive into creating your own character in the game, explaining the different class options, skills, abilities, and everything in between.

This guide is going to feature all of the information from the character creator in the game itself, alongside some tips and tricks on getting the maximum out of your build. Players with experience creating characters in Dungeons & Dragons will likely feel right at home but for other players, some of the aspects of character creation may be a little confusing. 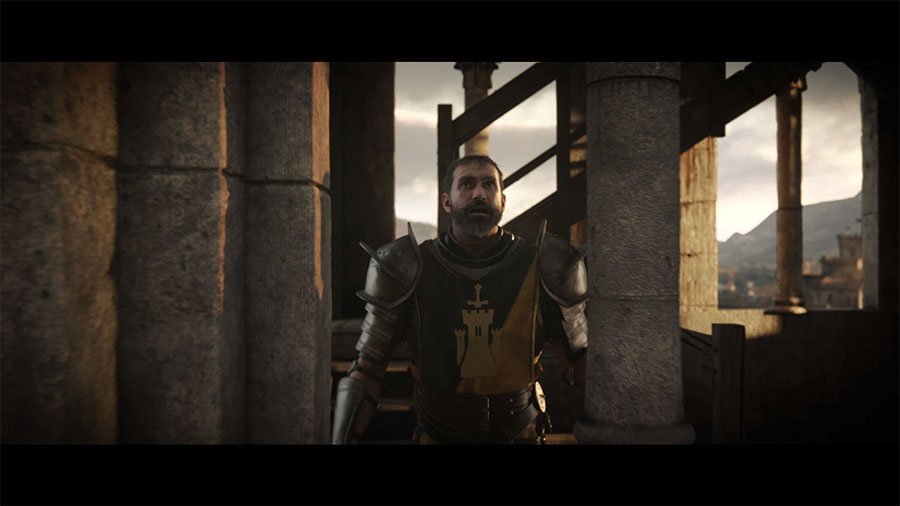 If you’re not familiar with Dungeons & Dragons or other games of this type, the character creation process may be a little overwhelming. However, it’s actually relatively simple once you cut through to the very basics of creating your own character.

There are 6 main abilities in the game. Strength, Dexterity, Constitution, Intelligence, Wisdom, and Charisma. While it’s not really possible to create a bad character, as a lot of characters are about playing the role, but it is definitely possible to make inefficient characters. There is a huge variety and tons of potential but for the sake of keeping things simple, we’re focusing on the basics for creating your first character. There are many exceptions to the below but again, just the basics.

A lot of focus when building your character should be based on Proficiency bonuses. As you level up in the game your Proficiency Bonus increases. A Proficiency Bonus applies that bonus to all skills in which the character is Proficient. So for example, a Rogue will often use Stealth and Sleight of Hand, so you want to make sure you are proficient with those skills. 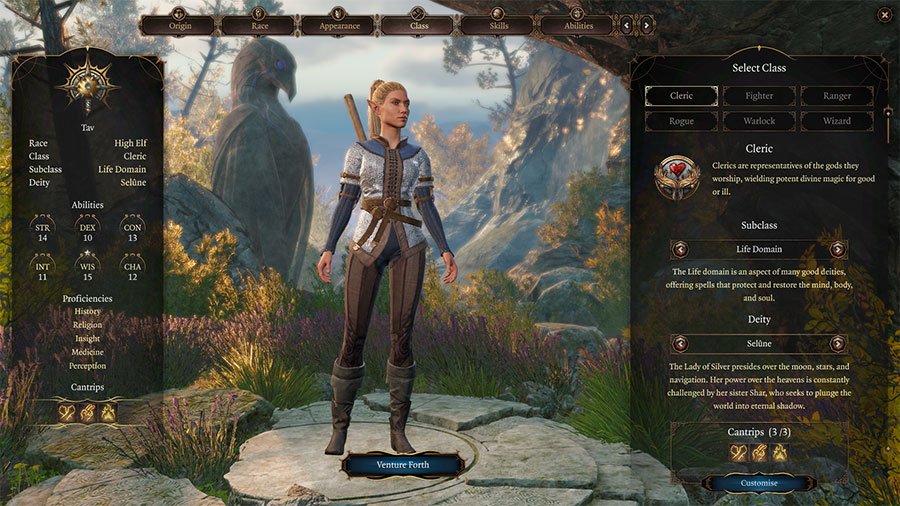 With a basic understanding of Proficiencies, now it’s time to set the foundations for your character. The game puts the choices in a strange order as you will likely want to choose your class first. There are six classes available in Early Access. Cleric, Fighters, Ranger, Rogue, Warlock, and Wizard. It’s worth noting that during Chapter 1 of the game you will encounter a Cleric, a Fighter, a Rogue, and a Wizard. So if you don’t want to create a healing class like a Cleric, don’t worry as you will get healing options very early.

Some classes, such as Cleric, have access to additional options that can drastically change the classes role. For example, Life Domain Clerics focus primarily on healing whereas Light Domain Clerics have access to more damaging spells. Other classes, such as Fighter, unlock these options after leveling up so there’s always more to a class than what is available at the start.

Ultimately, the class decision is up to you. They are all functional, balanced, and great fun to play. You will also notice that magical classes have access to Cantrips and Spells. Cantrips are abilities that you can use every turn if you wish. Spells are more powerful but also restricted based on Spell Slots, a resource for casting spells that is returned when you sleep or long rest.

Once you have decided which class to play, head to the Origin tab. 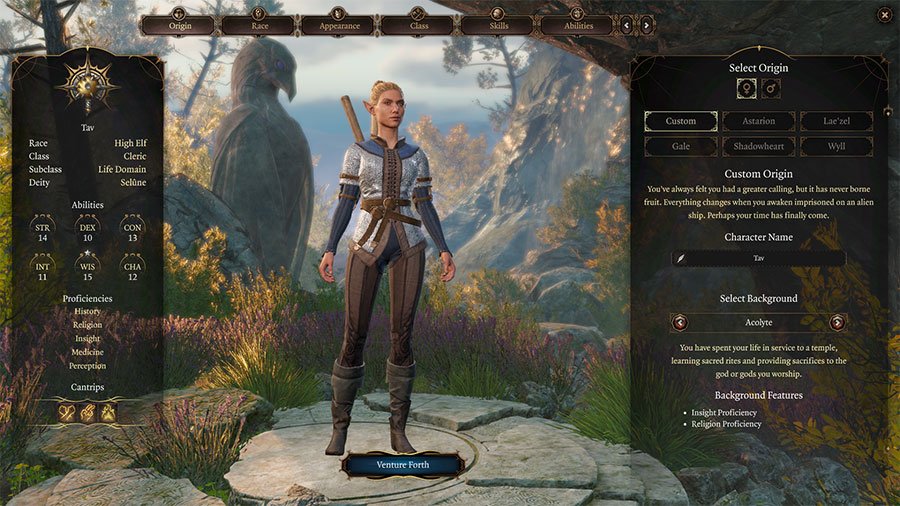 Now that you’ve chosen your class, look at the Abilities on the left and see what your classes main Ability is. As you can see above our Cleric’s main source of stats comes with Wisdom, so all Wisdom actions are boosted with a Proficiency bonus. Now you want to focus on your Background. These are additional Proficiencies that fall outside your main Abilities. This is the best way to add a bit of charm and character to your creation.

For example, you’re now building a Cleric. A divine healer to keep your allies alive. The class automatically gets Proficiency Bonuses to Religion, Medicine, and Perception. Maybe you want to double up as a bit of thief or stealth specialist. You can take the Urchin background that provides a bonus to Sleight of Hand and Stealth. Or maybe you want to be more useful in conversations so you take Noble to be able to persuade people to your way of thinking.

All Skills are used are some point or another but there are definitely ones that occur more frequently. Persuasion and Intimidation can often be used to avoid fights, obtain information and perform otherwise very useful feats. If you’re unsure of what to take, Noble is a generally safe bet.

Once you’ve done the Origin, choose your race. 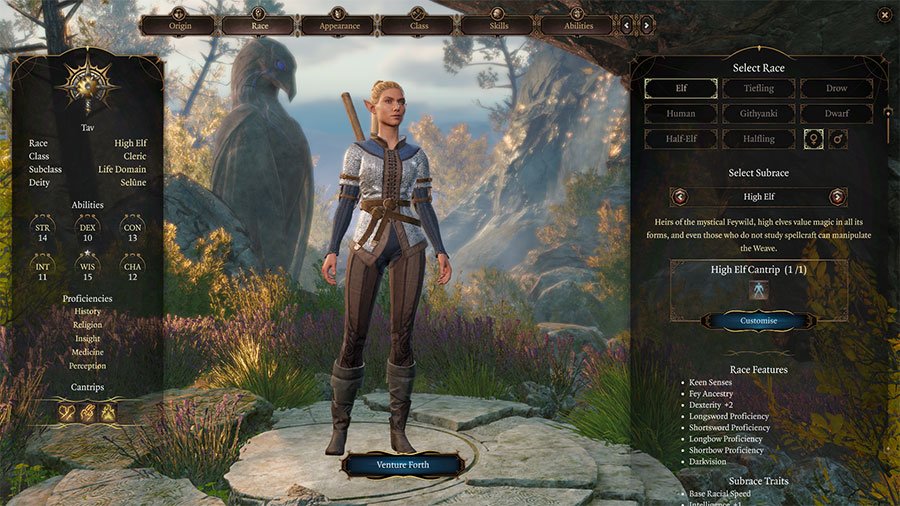 Humans are a safe choice as they provide +1 to all stats. Half-Elf is another good choice as you’re given the choice of adding two points to any of the Abilities. There are many other ways to build characters. For example you could quite easily focus on Wisdom & Dexterity as a Cleric for a higher armor value, but breaking from the traditional ability scores can be more difficult to manage.

Not having the bonuses from the race is not a game breaker. If you want to play a specific race because of lore or appearance, go for it. 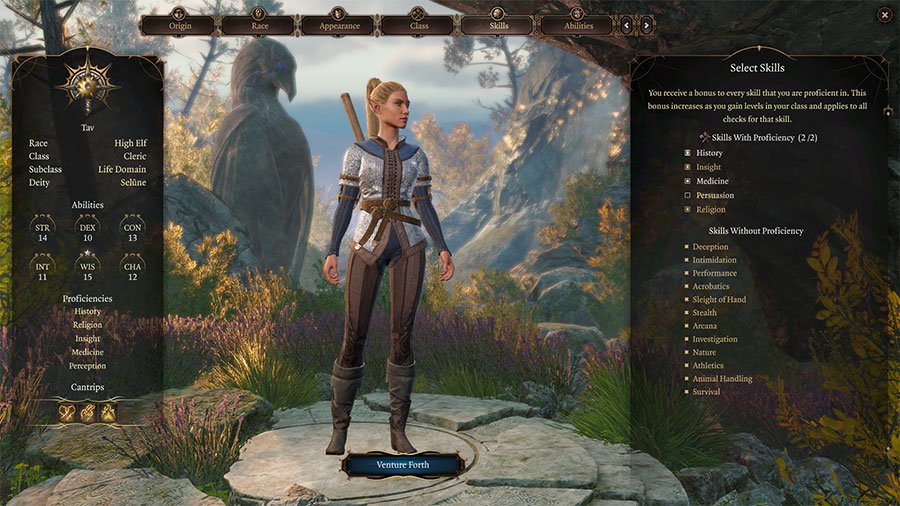 Skills are the backbone of your characters strengths and weaknesses. They are not directly tied to combat, they are more for other areas of the game. During your adventures in Baldur’s Gate 3 you will come across hundreds of unique situations that require specialist knowledge in certain areas. There is no right or wrong choice here, all skills are valuable, but others do see more use.

Animal Handling can help you avoid a fight against a fearsome Owlbear. Intimidating a group of Goblins could help you avoid a dangerous fight. Sleight of Hand makes it easier to pick locks and pickpocket other characters. Survival can help you identify tracks and spot ambushes. It’s more about creating your characters personality that maximizing efficiency here.

If you’re stuck on choices Persuasion is used a lot throughout the game. Sleight of Hand is a great skill for getting into secret areas and completing challenging objectives. Medicine can help with healing injured civilians you encounter. Stealth can help you open combat with a powerful, swift strike to a strong opponent. There’s a lot of options here, experiment and play the game for a few hours and see what would most benefit your play style. 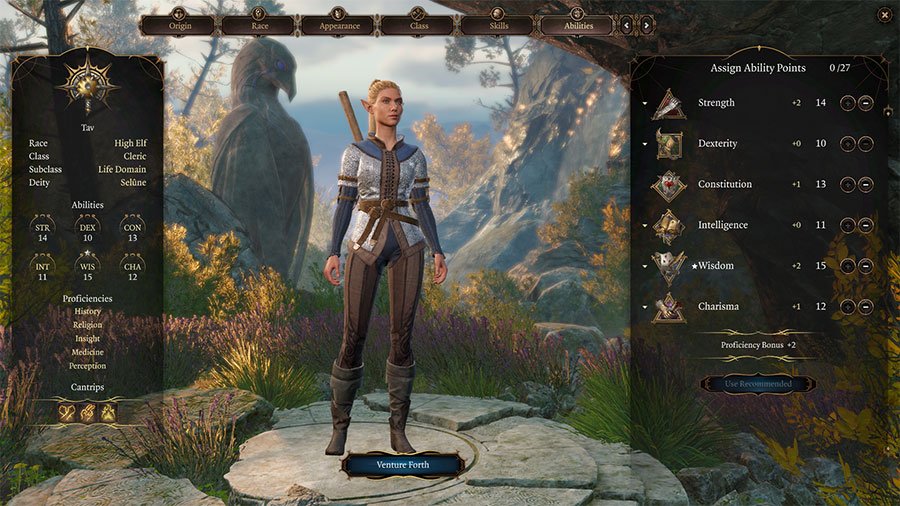 This is the one area where you can really make your experience much easier or much harder. Using Cleric as an example again. Wisdom determines their ability to cast their spells. Ignoring that entirely and placing all of your points into Charisma will make some parts of the game much more complicated. It’s perfectly viable to build whacky characters but if it’s your first time using a system of this type, it’s a good idea to find your footing with basic characters first.

You can always come back and make something a bit more unique.

Strength
Determines how likely your attack is to hit your target, when using Strength weapons
Affects your jumping distance
Increases carrying capacity

Dexterity
Determines how likely your attack is to hit your target, when using Dexterity weapons
Influences Initiative (Who goes first in combat)
Increases your armor value (How hard you are to be hit)

Each Ability can only be as high as 17 during character creation, that includes bonuses from everything else. Focus on the primary abilities to support your chosen class and then, if you choose, you can add a couple of points elsewhere for some bonuses to other aspects of your character.

Creating, experimenting, and enjoying new characters is one of the most exciting aspects of Baldur’s Gate 3 so don’t be afraid to experiment. It’s easy enough to roll a new character so have fun with it and see what you can come up with. 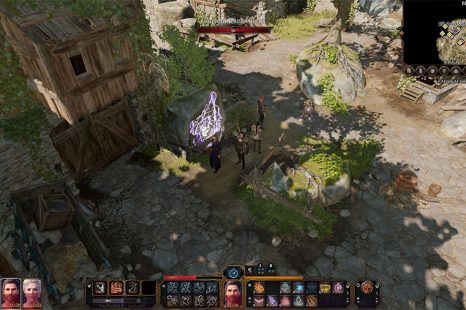 How To Fast Travel In Baldur’s Gate 3

Baldur’s Gate III has a very large world to explore, and walking isn’t overly quick. This guide on How To Fast Travel In Baldur’s Gate 3 will explain the process of fast traveling as well as 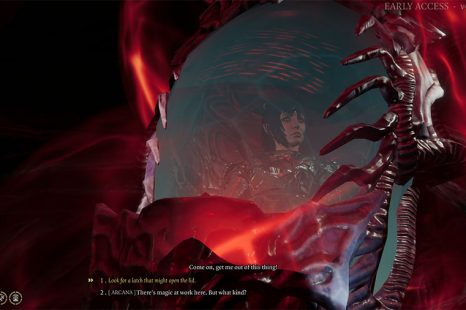 Can You Rescue The Woman Trapped In The Mind Flayer Pod In Baldur’s Gate 3?

In the prologue for Baldur’s Gate III you find a survivor trapped within the pod. As all good heroes would, you ask yourself can you rescue the woman trapped in the Mind Flayer Pod in Baldur’s Gate 3? 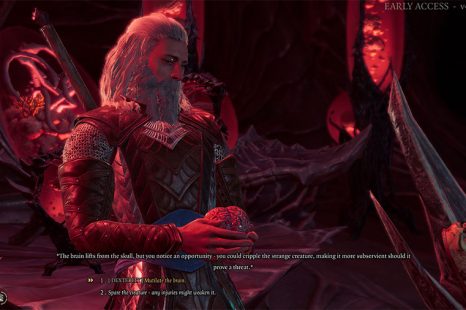 Baldur’s Gate 3 features many paths, many options, but each come with a consequence. In this Baldur’s Gate 3 Choices & Consequences Guide we list many of the major choices that you can make 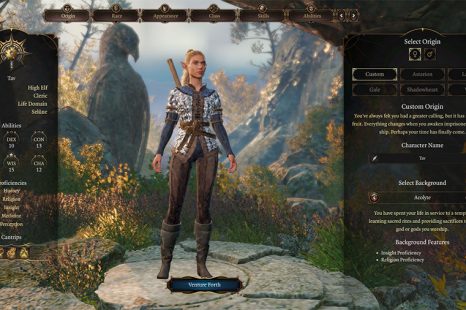 Scared of messing up or wondering what’s the best class to build in Baldur’s Gate III? This Baldur’s Gate 3 Character Creation Guide takes a deep dive into creating your own character in the game